Baptists and the Fifth Monarchy

The Lord Jesus was clear - His kingdom is not of this world (John 18:36). Yet Christians have been overly focused on worldly things since Peter tried to stop Jesus from going to the cross. Theonomic Reconstructionists believe Mosaic Law is to be forcibly imposed upon society, apparently oblivious to the covenant structure in Scripture which applies law given within a covenant to those in that covenant. Man does not have the authority to extract laws from a covenant without express warrant from Scripture.

But man tends to make his own rules, trying to redeem culture and make the world ready for Christ's return; putting himself in place of God. Every time this agenda is pursued, men claiming Christ use force of arms to gain support for their cause.

Baptists and our fore-runners have consistently resisted such movements, seeing the overlapping division God has instituted between His kingdom and the state. We participate in state affairs but we do not conflate the state with the spiritual kingdom to which we belong.

Louise Fargo Brown has written one of the best accounts of the political turmoil in 17th century England, with dozens of footnotes per chapter. It is not a difficult read, though it may be difficult to accept for those who think it our charge to claim the culture and country for God.

I think Christians are better prepared to live for Christ in our own time if we have some understanding of how they lived in our history. As the history of Israel was preserved, in part, so we would not sin like they did (1 Corinthians 10).We should be eager to learn from history outside the Bible for the same reason.

It is my prayer that my brothers and sisters in Christ will learn from those who have gone before and walk as wise children in this dark time.

For the kingdom of God and not that of man, I am your fellow sojourner and servant in Christ, 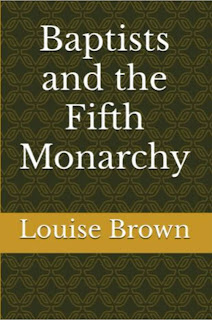 Posted by Stuart Brogden at 10:21 AM No comments:

An Exposition on the book of Revelation

Hansard Knollys lived from 1598 - 1691 and served as a Baptist elder for the last 50 years of his life, having been convinced from Scripture that infant baptism was a fable.

He was on of the signatories of the 1646 LBC and his Exposition of the Book of Revelation was published shortly before his death, in 1688.
That book is now available in modern type in paper and Kindle formats. 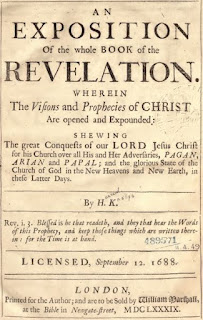 Posted by Stuart Brogden at 2:45 PM No comments:

The Resurrection Defined and Defended

Posted by Stuart Brogden at 2:37 PM No comments:

Baptist and reforming to God's Word